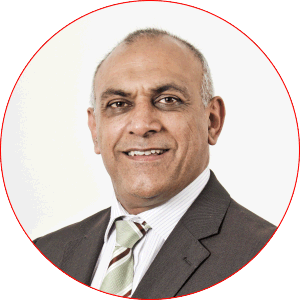 Khalid Abdulla MBA (UCT), B. Compt (Hons), CTA (UNISA), brings sporting passion, business intellect, leadership and a resolve for mentoring and coaching, to the espAfrika board and executives.  Acknowledged and awarded by his peers and industry for his role in leading and nurturing teams; Abdulla is committed to the development of human capital, the results of which have been noted in the exceptional growth of, amongst others, espAfrika’s portfolio and business outcomes in recent years.

Abdulla’s prowess on the sporting field – representing Western Province at squash, soccer, athletics and volleyball and South Africa in the latter two – has also translated into wins in the boardroom.  He is a great believer in sharing his vast expertise and knowledge of business skills and  practises, especially his experience within various business sectors including marketing, turnaround and especially the finance sector.  For espAfrika specifically, service excellence is critical to its ongoing success and is something Abdulla implements and grows regularly with passion, and is fundamental to the company’s ongoing profitability.

Abdulla was the recipient of the Black Business Executive Circle (BBEC)/ Absa Bank Kaelo Award (2010), and has also been a speaker for the Department of Trade and Industry at conferences in the United Kingdom and Germany.  His numerous awards and the respect in which he is held by his colleagues and peers, is recognition of  his commitment to a better trained and educated workforce – one that he leads by example.

Back to Board of Directors